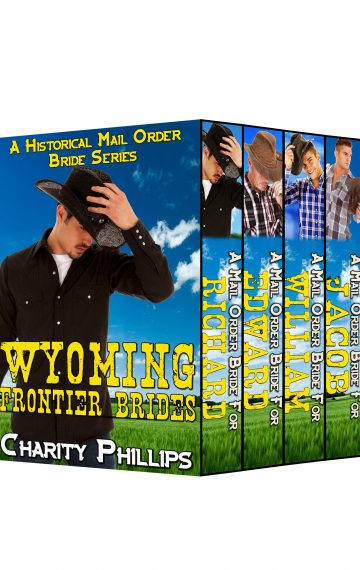 Follow The Stories Of Richard, Edward, William & Jacob As They Search For True Love In The Wyoming Frontier…

Richard Greene has taught himself to be happy with the simple things in life. If he’s learned anything from his experiences, it’s that you can’t trust anyone but yourself, and relationships are the quickest way to trade a quiet life for one filled with chaos and pain.

But despite his misgivings about marital unions—and especially mail-order-brides—he can’t deny that he’s in need of help on his little Wyoming farm. After a few painstaking months of searching, Richard selects Mia from Virginia to join him out West, planning to make their partnership a mere marriage of convenience.

But when the gentle, dark-haired school teacher arrives, Richard starts questioning everything he knows, and soon he’s discarding all of the rigid rules that left him without a wife for so long.

Out of the ashes of his old life rises a second chance at love—but will his wounded heart let him grab hold of it before it soars away?

The sheriff of Davinia, Edward Higgins, has a sterling reputation. He’s kind, thoughtful, brave, and hardworking—exactly the sort of man there’s a shortage of in this world. Unfortunately, there’s been no shortage of dangerous criminals in his long and varied past, so settling down to start a family has been out of the question—until now.

In the winter of his twentieth year as sheriff, he’s finally passing the badge on to someone else and marrying Eliza, a woman who has been waiting patiently to wed Edward for three years. Though they’ve never met in person, Eliza and Edward are a perfect match, and it doesn’t take long for them to feel in sync.

But before they embark on their honeymoon, the newlyweds are interrupted by a repeat offender from Edward’s past: a vindictive ex-lawman determined to make him pay for the life of luxury he caused him to lose.

Will Edward and Eliza’s love be able to break free and flourish—or will it wither, trapped by the steely bars of his past?

After moving to Johnson County at the age of twelve, William “Willy” Butler happily acclimated to his position as the eyes and ears of idyllic Davinia, Wyoming. Though he spends much of his time working hard to provide only the choicest meat and fish for his butcher shop—and lending his own hands, ears, and shoulders to its customers—there’s a little-seen side to him that has gone unacknowledged for too long: a yearning for a true connection that drives him to answer an ad from a desperate-sounding nurse who has been “wandering like a comet in search of a cluster.”

Jessica is clearly in danger, but Willy has no idea how bad it is until she shows up on his doorstep days early without a coat, bag, or dollar to her name. Willy is bewitched by her sharp wit and smoldering gaze, but the feisty Jessica turns out to have no intentions of truly settling down or dragging him through the shocking history of her life. Luckily, fate seems to have other plans.

Can Willy convince a wandering spirit to stay under his serene skies, or will Jessica streak out of his path before this new love can sync and fall into harmonious orbit?

Jacob Everett is used to turbulence and shake-ups—the one fact he’s always held true is that everything will change. He remembers this when he has to give up his dream of being a deputy to become a farmhand; and he remembers it when he finds himself turning to personal advertisements to find a bride, instead of pursuing the kind of fairy-tale romance he’s secretly always dreamed of. Even though it may not turn out to be a perfect fit, Jacob is ready to brave uncertain seas to find true love.