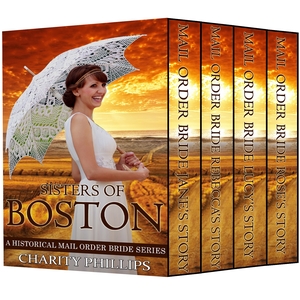 The last year has been incredibly painful for sisters Jane, Rebecca, Lucy, and Rose, to say the least. Their father had been killed in the Civil War, leaving the four young women devastated and orphaned. Now, the Adams sisters struggle to cope with the ravages of the War and are attempting to piece their lives back together eight months after the relentless fighting came to an end.

Book 1: Mail Order Bride: Jane’s Story: Jane Adams is still reeling from the deaths of both her father and her fiancée in the War. Though it has been more than a year since Adam’s death and nearly two since her father’s, she still cannot convince her mind to believe that it is real.

Her sisters decide it’s time for the four of them to leave Boston and start new lives away from the pain and difficult memories that haunt them. When they tell Jane about their idea to become mail order brides for men in the Frontier, Jane finds it hard to accept at first; her heart is still with Adam, and she cannot bear the thought of leaving the only home she has ever known–and what’s left of the life that they could have had.

In the newspaper, however, she finds an intriguing advertisement from a man in Oregon named John Grey. He has suffered heartbreak, too, and Jane thinks that perhaps this just might be the opportunity she needs after all. She makes plans to head out West to help him raise his daughter–which will get her out of Boston–but ultimately, his pain will keep him from wanting the type of relationship she thinks she can never have again. That is, until the letters start.

Can these two overcome their own heartaches and find that sometimes it’s what is behind us that keeps us going forward?

Book 2: Mail Order Bride: Rebecca’s Story: Rebecca spends days sifting through advertisements until, finally, she finds one from a man living in the Oregon Territory that sounds just perfect. Mr. Ezra Bolton seems sweet, romantic, and ready to start an enchanting new life with her. When she packs up her life and heads to Oregon, however, Rebecca learns a terrible secret about Mr. Bolton and her chances at the new beginning she longs for are threatened.

Will Rebecca manage to find solace in this man, or will all hopes of starting anew be whisked away, leaving her in a more precarious position than she had been in before ever meeting Mr. Bolton?

Book 3: Mail Order Bride: Lucy’s Story: Lucy Adams dreams of a romance that she felt the Civil War stole from her. Just as she got to the age when she would be able to become a part of society like her older sisters and possibly find a beau, the fighting began, the men went to battle, and life became about far more than just courtship.

In her despair, Lucy longs for a romance that will sweep her off her feet and give her a new life. When the time comes to meet her betrothed, however, she might just find that fairy tales are not always as they seem.

Will she be able to see beyond what she thought she wanted to find what is truly right for her?

Book 4: Mail Order Bride: Rose’s Story: Rose knows that her three sisters are eager to get out of Boston; Rose, however, is not convinced by their plan.

She does not like the idea of responding to the advertisements and feels that if she had the opportunity, she could make it on her own in the city. She was always more interested in the salons and businesses than courtships and marriage, anyway.

When her sisters make it clear that they won’t stand for her not joining them in Oregon, however, Rose has to decide how she can stay true to herself but not let down the only family she has left?