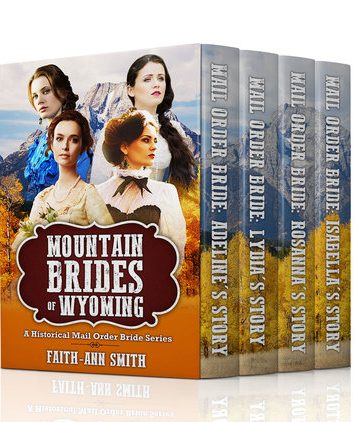 Book 1: Mail Order Bride Adeline’s Story: Adeline Brandt longs to raise a family. Her loving husband Robert promises to fulfill this desire but tragically perishes in the Civil War. Shortly after his death, doctors tell the already grief-stricken Adeline that she is barren; she will never experience the joy of having children of her own.

In an attempt to ease her suffering, a childhood friend offers what she thinks is the perfect solution to escape Adeline’s woes: to head out west to the frontier as a mail order bride and get a fresh start on life. Adeline hesitates, but decides to accept the offer.

A handsome widower named Alexander Raymond is looking for a wife who can help him open the first library in Cheyenne, Wyoming. His plan? Marriage in name only, and young Adeline seems to fit the bill nicely.

Can Adeline set aside her pain and sorrow for the chance to love again? And will God bless her with the greatest gift of all?

Book 2: Mail Order Bride Lydia’s Story: Lydia Dow refuses to marry a Boston dandy. Thrilled by the prospect of escaping stuffy New England for a new adventure in the frontier, she has been corresponding with the charming David Cavendish of Cheyenne, Wyoming, and has her heart set on becoming his mail order bride.

But when Lydia arrives, she learns a startling truth: David cannot read or write, but had commissioned a friend to write the letters on his behalf. Stunned by the news, Lydia wonders whose thoughts were really reflected in those letters, and what other secrets David had up his sleeve.

When the truth unfolds, will she alienate him forever, or will Lydia become the woman of his dreams, answering his prayers for a life filled with happiness and love?

Book 3: Mail Order Bride Rosanna’s Story: Orphaned when her parents perished during the smallpox epidemic, young Rosanna Ellington is left with a little brother to care for. As a smallpox survivor, Rosanna finds it difficult to live an ordinary life, her appearance now tarnished by scars—cruel reminders of the devastating disease.

When a family friend suggests for her to respond to an ad seeking a God-fearing mail order bride, Rosanna finally feels a glimmer of hope: the Cheyenne man states that “appearance and status of wealth are not important.”

Without revealing her condition, Rosanna hopes that her future husband will be willing to marry her, but when she arrives, she is stunned to learn that Alexander Malone did not place the ad after all: his sister had been the person secretly corresponding with her all along.

When they meet, will Alexander see past Rosanna’s flaws and find her inner beauty?

Book 4: Mail Order Bride Isabella’s Story: When Isabella discovers that she is with child, she flees her abusive husband in search of a better life. Without references, Isabella realizes that work is hard to find, so when a maid named Lilly finds her on the streets of Boston and offers her a potential position where she works, Isabella is relieved and soon begins to work for the Crawford family.

But sometimes, the grass is not always greener on the other side. When faced with the threat of even more abuse from her employer, Isabella must flee yet again. In a hurry, she discovers an advertisement for a mail-order bride from a man in Cheyenne named Mr. Augustus Cranston and responds. Out of sheer desperation, she decides to begin her travels out West before she has the chance to receive a reply to her letter, accompanied by her new friend, Lilly.

After she makes the long trip to Cheyenne, however, Isabella finally meets Mr. Cranston and is faced with a new dilemma. Will her suitor be the man who can commit to a lifetime of love, or will God have other plans for of Isabella and her unborn child?