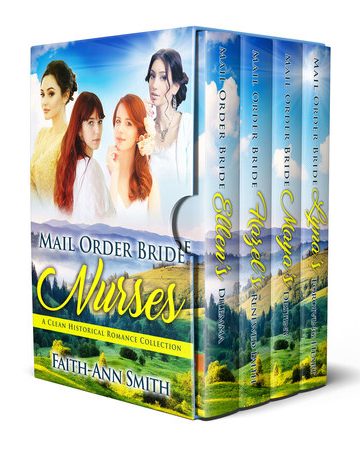 Ellen Stewart’s father has plans for her to marry the prominent–yet revolting–Edward “The Mule” Taylor, and she is none too pleased. One day, the well-respected Lieutenant Michael Hunter arrives from the battlefield nearly dead and she is able to convince the surrounding doctors to place him under her care. Within a short while, she is able to nurse him back health and their bond grows stronger with each passing day.

Confusion fills Ellen’s heart as she struggles to balance her obligation to her father and her bond with a prominent soldier. Will Ellen find clarity and decide to pursue a relationship based on love, or will she abide by her father’s wishes and marry a man she despises simply based on his family’s status?

Former Civil War nurse Hazel Dawson finds herself engaged to the vile Gage Soren due to the wishes of her father, prominent businessman, John Dawson. Meanwhile, she’s been secretly writing to her betrothed, a rancher in San Francisco by the name of Noah Walker. She bravely makes her way via ship to San Francisco to seek out her beloved Noah, but upon her arrival, something is amiss. His home is not as he described, and when a man opens the door to greet her and claims to be Noah, his appearance, though strikingly handsome, is not what she expected. A serious chemistry quickly builds between them, and as she gets to know Noah, he reveals more and more about himself, drawing her in.

Maya Sheeran lives with her Aunt Bessie and Uncle Thomas in the home previously owned by her late father. Their attempts at playing matchmaker in Maya’s life continually fall flat, until Aunt Bessie finally presents her niece with an ultimatum: either marry Bessie’s son, or she will be kicked out of the house once and for all. After some protest, Maya accepts a boarding pass that her uncle purchased for her to journey to California to meet her new beau.

When she arrives, she finds that the man she has been set up with is none other than James Hawke, a boy she had fallen for when she was a teen, but had broken her heart so many years ago when he left unannounced.

Will fate give these two a second chance at love? Or will James’ troubled past keep Maya from being able to fall for him once again?

With the help of her friend and housekeeper, Celia, Lyna takes a long journey by sea to California to meet her new beau Mr. Adam Conner, who has asked for her hand.