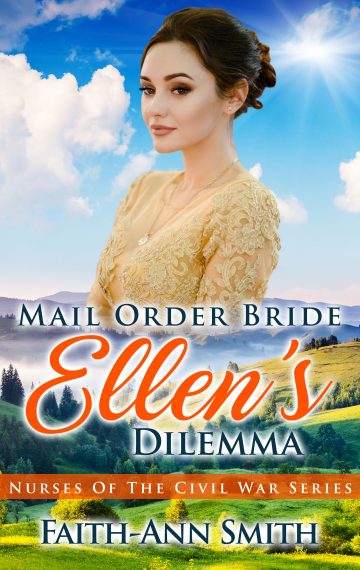 Ellen Stewart’s father has plans for her to marry the prominent–yet revolting–Edward “The Mule” Taylor, and she is none too pleased. She soon learns their housekeeper and her closest confidant, Mairi, had responded to a mail order bride advertisement through letters written in Ellen’s name, and has struck up promising correspondence with William Thomas on her behalf, who seems eloquent and well-educated, yet incredibly humble.

Ellen’s heart is swept up quickly, but hope turns to heartbreak when William mentions he feels compelled to fight for his beliefs in the coming Civil War, and that she should not wait for him. She soon decides that she, too, wants to join the war efforts by volunteering as a nurse, hoping God will allow her path to cross with William’s.

One day, the well-respected Lieutenant Michael Hunter arrives from the battlefield nearly dead and she is able to convince the surrounding doctors to place him under her care. Within a short while, she is able to nurse him back health and their bond grows stronger with each passing day.

Confusion fills Ellen’s heart as she struggles to balance her obligation to her father, her allegiance to William and her bond with a prominent soldier. Will Ellen find clarity and decide to pursue a relationship based on love, or will she abide by her father’s wishes and marry a man she despises simply based on his family’s status?

**This is the fifth story of the Nurses Of The Civil War series. Each installment is a standalone 20,000 word clean historical Western romance and may be read in any order.