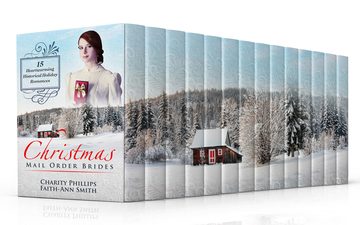 This holiday season, Charity Phillips and Faith-Ann Smith are pleased to bring you Christmas Mail Order Brides, a collection of the following 15 heartwarming historical romances:

Olivia’s Christmas On The Frontier: A smart, independent young woman with a sense of adventure takes a voyage by sea to the Frontier and is blessed with a special Christmas surprise.

Abigail’s Christmas Gift: From the hustle and bustle of New York to the comforting home life in Coos Bay, Oregon, Abigail Copeland realizes that love and adventure can be hers.

Mail Order Bride Sarah: After losing her one true love in the war five years ago, Sarah is drawn to 36-year-old homesteader and widower William J. Lindsay’s ad for a “calm, good-natured lass from the East to help build his home and hearth.” As she and William begin their correspondence, she finds herself having feelings she’d thought had died forever.

Elizabeth’s Christmas Miracle: Will Elizabeth and Frederick ever be able to unite their two similar, but different families? It may take a Christmas miracle and a whole lot of faith.

Mail Order Bride Caroline: When Caroline arrives in Montana, she discovers that the man she chose from a mail order bride ad may not be the man she thought he was. She must decide where her loyalties lie—and if she can find it in herself to look beyond his past and accept him for the man he is today.

Mail Order Bride Louisa: A difficult wagon train journey with tragic consequences, leaves Louisa wondering if all of the challenges that had been put in front of her were really to lead her to the man she was meant to be with all along, even if he enters her life in an unexpected way.

Mail Order Bride Emily: After arriving in Montana, Emily is delighted to find that Chad Gaines, the man who she intends to marry, appears to be sweet, kind and caring. Soon though, she discovers that Chad is harboring a secret that could threaten their newly forming relationship and the very future she has long been dreaming of.

Mail Order Bride Charlotte: Charlotte finds a potential suitor quickly and they make plans to travel, but when she meets her intended face to face, she finds it difficult to talk to him. Doubt creeps in and she begins to wonder if their courtship was rushed. Has she made a terrible mistake, or will the two find another way to communicate so that their love has a chance to blossom and grow?

Mail Order Bride Betsy: A problem arises, when Betsy steps off of the bride train and none of the men in the town choose her. Alone and hopeless, she embarks on her own, but soon finds that strength–and love–often come when you aren’t looking for them.

Mail Order Bride: Jane’s Story: Jane finds an intriguing advertisement in the newspaper from a man in Oregon named John Grey, who like her, has also suffered heartbreak. She makes plans to head out West to help him raise his daughter, but ultimately, his pain will keep him from wanting the type of relationship she thinks she can never have again. That is, until the letters start.

Sophie’s Christmas On The Frontier: A widowed teacher from Baltimore makes the voyage to Seattle with her children to start anew, and Christmastime in the Northwest turns out to be more beautiful than she could have dreamed.

Letters From The Gold Rush Wagon