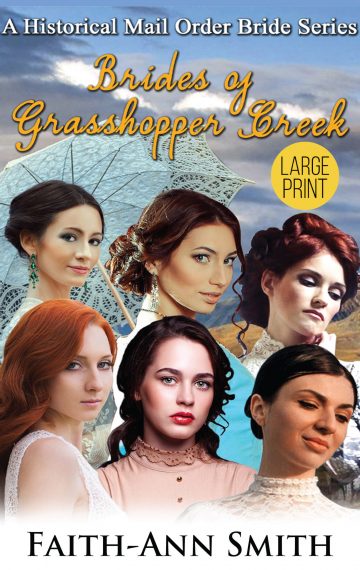 Read All About The Journeys Of Six Women Headed Out To The Frontier Town Of Bannack, Montana In Search Of New Lives And Love In The 1860s

Book 1: Mail Order Bride Hannah: Hannah is thrilled to finally be on her way to the Frontier. She and her new husband Bradley have been planning this trip for as long as they have been planning their lives together it seems, and now that they’ve left Independence, Missouri on the wagon train west, it appears that all of their dreams are coming true.

Within just a few short weeks of leaving, however, the harsh realities of life on the wagon train strike Hannah hard and she is forced to realize that the adventure she envisioned with Bradley is not at all what it seemed. Will Hannah overcome hardship when her adventure out west takes a tragic turn for the worse?

Book 2: Mail Order Bride Caroline: The Lord guides Caroline to an ad in the newspaper from a gold miner in Bannack who is searching for a lovely woman to become his bride. Soon, she joins the wagon train and anxiously makes the journey out west to start her new life.

When she arrives, however, she discovers that the man she chose may not be the man she thought he was. She must decide where her loyalties lie—and if she can find it in herself to look beyond Bailey’s past and accept him for the man he is today.

Book 3: Mail Order Bride Louisa: After the death of her sweetheart, Louisa feels that there is nothing left in life for her, and wonders what she could possibly do to fill the years that lie ahead. When her sister suggests for Louisa to become a mail order bride for one of the men in the frontier, Louisa is appalled, but with the prospect of her sister and brother leaving on the wagon train with their cousins, Louisa knows that she must make the decision to either be left alone without any relatives and only her painful memories, or to enter marriage with a man she doesn’t know.

Book 4: Mail Order Bride Emily: Emily has never quite fit in with the rest of the high society young women who are supposed to be her peers. Raised in privilege—and expected to live up to the part now that she is old enough to marry—Emily cares more about her dream of becoming a teacher than the idea of hosting fancy tea parties and being courted by potential suitors. Feeling that she cannot continue being told what to do any longer, Emily makes the bold decision to go out west so that she can start a school and teach the children of the Frontier. In order to fulfill her dream, however, she must become a mail order bride.

Book 5: Mail Order Bride Charlotte: After the death of their parents, Charlotte and her brother Victor only have each other left in the world. Well past marrying age at thirty years old, Charlotte has nearly resigned herself to spending her life taking care of Victor when she suddenly discovers that he has been planning for them to move away from Philadelphia and seek out their futures in the Frontier town of Bannack. Though Victor refuses to admit it, Charlotte knows that having a single sister following him around is limiting to him, so she decides to take responsibility for herself and find a man who is looking for a wife.

Book 6: Mail Order Bride Betsy: Betsy always knew that love would find her eventually, and until then, she would be happy watching the young men who lived in her mother’s boarding house court their sweethearts on the front porch. Everything seemed perfect until the War came too close to home, and what was once an elegant and privileged boarding school became a bloody hospital. Left the suffer the aftermath, Betsy decides that her only hope is to get out of her hometown and go as far away as she could. In order to do that, however, she would have to find a husband.