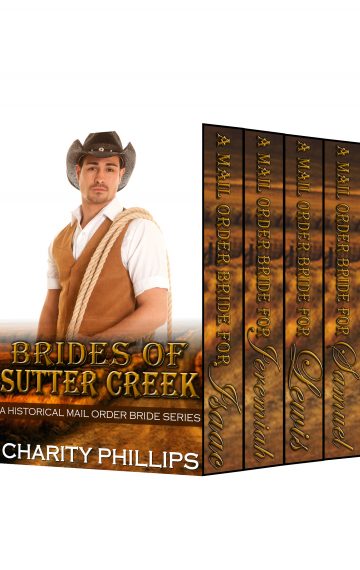 Read All About The Struggles Of Four Men As They Attempt To Find Love In The Lonely Mining Town Of Sutter Creek, California…

Isaac Walters is used to working his fingers to the bone, but he’s never had to work for much else. He inherits his business after his father’s retirement, and also manages to acquire his charming Sutter Creek home when his sister marries an oil tycoon on the East Coast. But when he nearly loses everything he has in a single act of carelessness, he’s finally pushed to consider how lucky he’s been. Tired of depending on the kindness of fate, Isaac decides to get serious about one thing at a time, starting with marriage; after all, what could be so difficult about forging a new way of life?

Miner Jeremiah Smith is used to spending his days counting down the minutes until the work whistle blows—that’s his cue to head to the saloon with his brother Earl, or for them to head home for a hearty meal and a night of playing cards. But when Earl dies, he leaves a void in the spacious Main Street home, and Jeremiah is faced with a tough decision: either hold out hope that his growing mining town will eventually attract single women, or begin his search for a mail order bride.

Lewis Brown has the greenest thumb in Sutter Creek—and the loneliest heart. The gentle farmer provides produce to more than a thousand residents, but he can’t seem to get a single woman to slow down and give him the time of day. To top it off, one of his best farmhands is getting married to a beautiful young woman and is moving out of state—only months after meeting her through a mail order bride service! Lewis is skeptical, but if love can bloom through the mail between a nurse and a farmhand, it can flourish anywhere.

Samuel Barnes is a jack-of-all-trades who has more than earned a break. As one of the dozen or so miners in town who wears more than one hat to help Sutter Creek get by without a sheriff, Samuel has done both of his jobs happily for years. When a few younger citizens volunteer for the force, however, he jumps at the chance to finally pursue the life of leisure he deserves.

After years of close calls and long nights, he’s looking forward to settling down with Sadie Adams, an enchanting young woman searching for the same serene stability as he is.

Unfortunately, Sadie barely has the chance to unpack before reality starts to interrupt their idyllic union. A group of bandits begins a startling raid on the town in search of a diamond worth more than all of the gold in California, and Samuel isn’t optimistic about their chances—until Sadie proves she’s just as cunning and daring as her husband-to-be.

Once again, Samuel has to put his life on the line to defend the town he loves—but this time, he has the unexpected help of the woman he’s come to love even more.